Warning: "continue" targeting switch is equivalent to "break". Did you mean to use "continue 2"? in /nfs/c03/h07/mnt/168065/domains/crazysox.net/html/wp-includes/pomo/plural-forms.php on line 210
 CrazySox | Life's too short to wear white socks. I only wear crazysox. | Page 4

Avery has a new passion. She’s way into Lego Friends. According to Wikipedia, Friends is a product range of the LEGO construction toy designed to appeal primarily to girls. Introduced in 2012, the theme includes unique “mini-doll” figures, which are about the same size as the traditional LEGO minifigure but are more detailed and realistic. The sets include pieces in pink and purple color schemes and depict scenes from suburban life set in the fictional town of Heartlake City. She got one set as a birthday present and immediately wanted to open it, she built it that night. With her birthday money she decided to order 3 more sets! 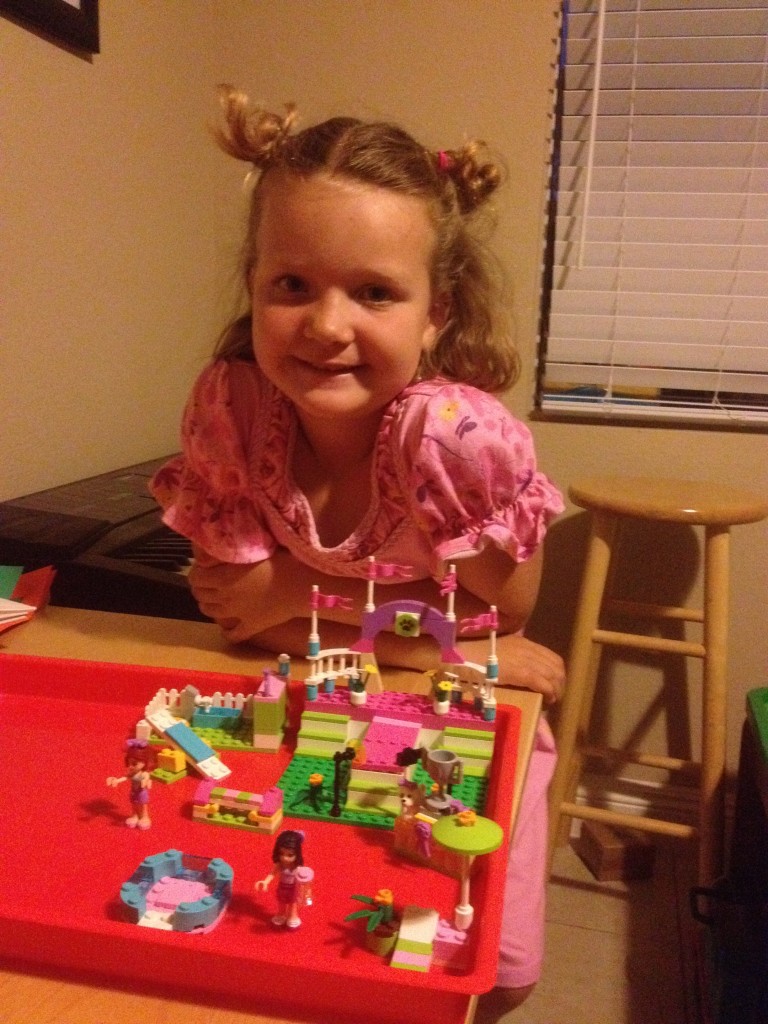 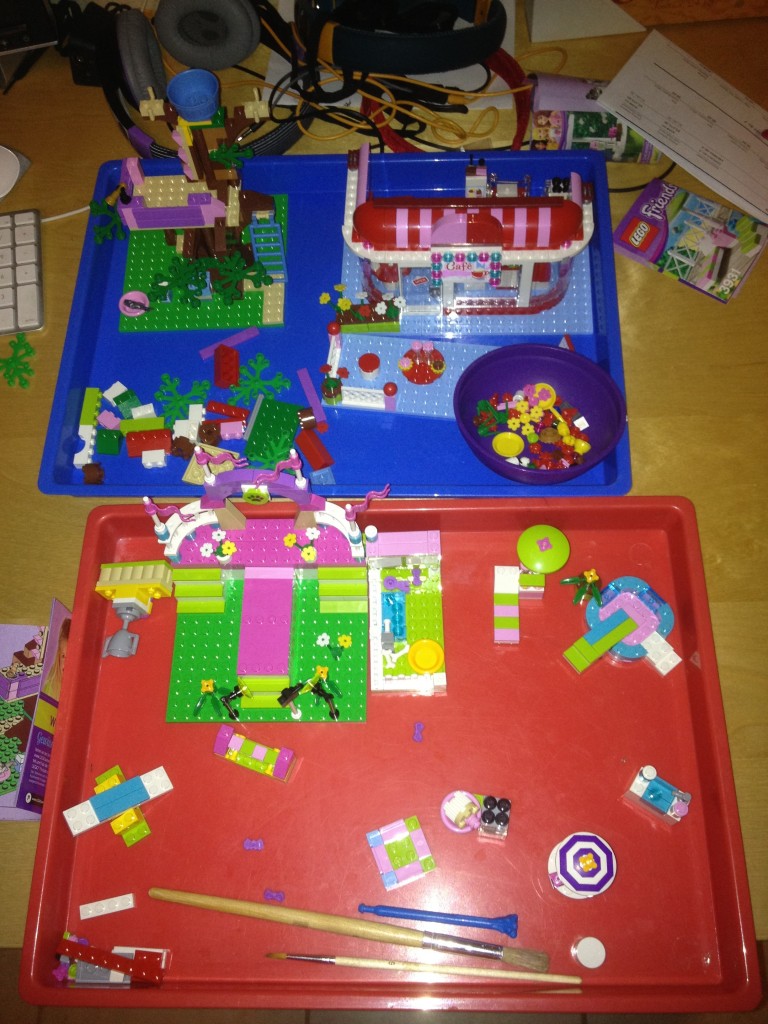 Avery recently celebrated her “golden” birthday. All birthdays are special and important, but the golden birthday is super special. The morning of she came downstairs to her new “birthday doll.” I received these growing up, then my niece (who’s 14 years younger than me) got them, and now I get to give them to Avery. 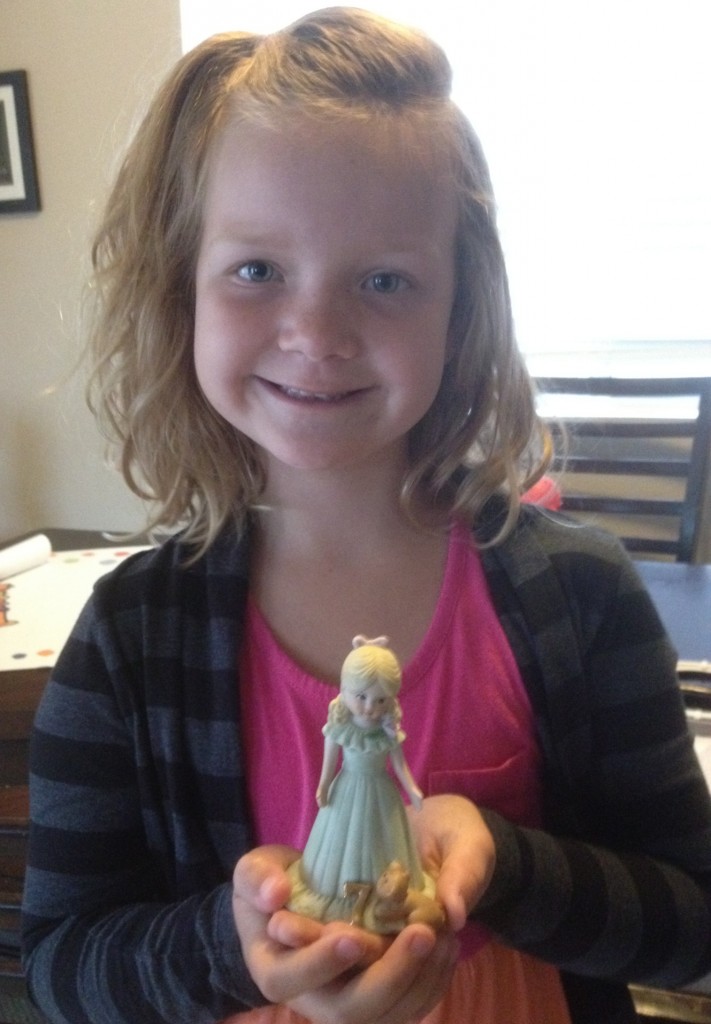 Sawyer and I took a treat to share with Avery’s class. It was fun listening to the kids sing Happy Birthday In Spanish and English. One student sang it in German and another in French. We took in these super small ice cream cones at Trader Joe’s. It was the perfect little treat. After the the treat each student wrote a note to Avery and drew a picture. When the students were all done, the teacher stapled them together to make a book. She loves this book. 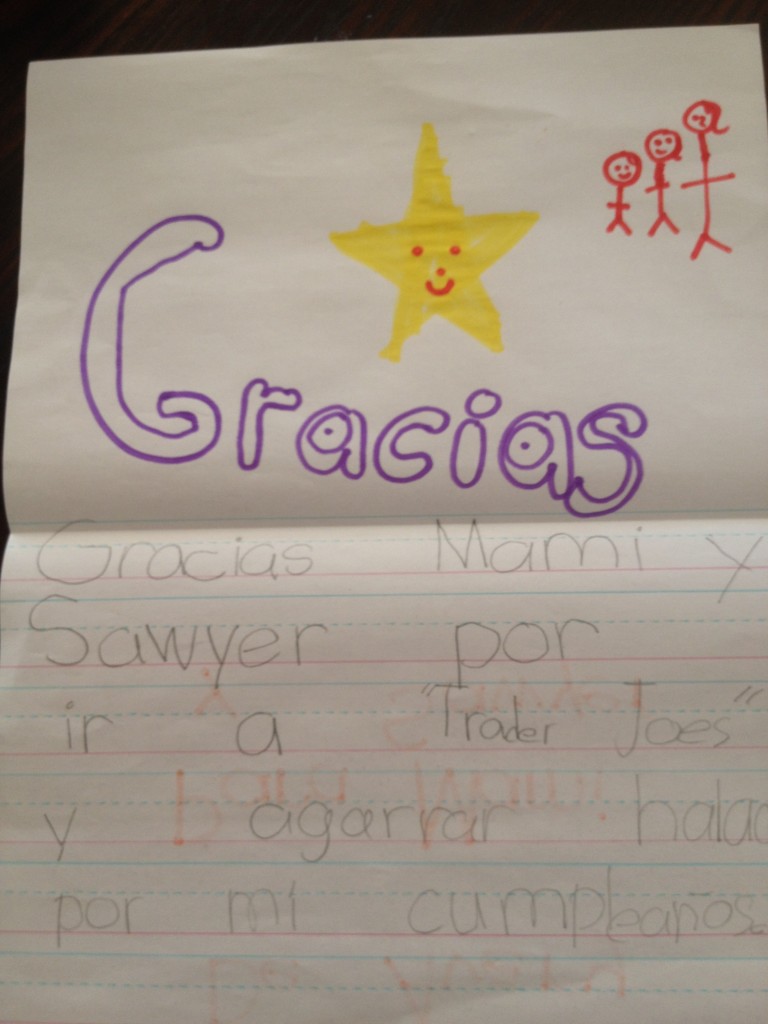 This is the note Avery wrote to Sawyer & I during class while the kids were writing her a note. 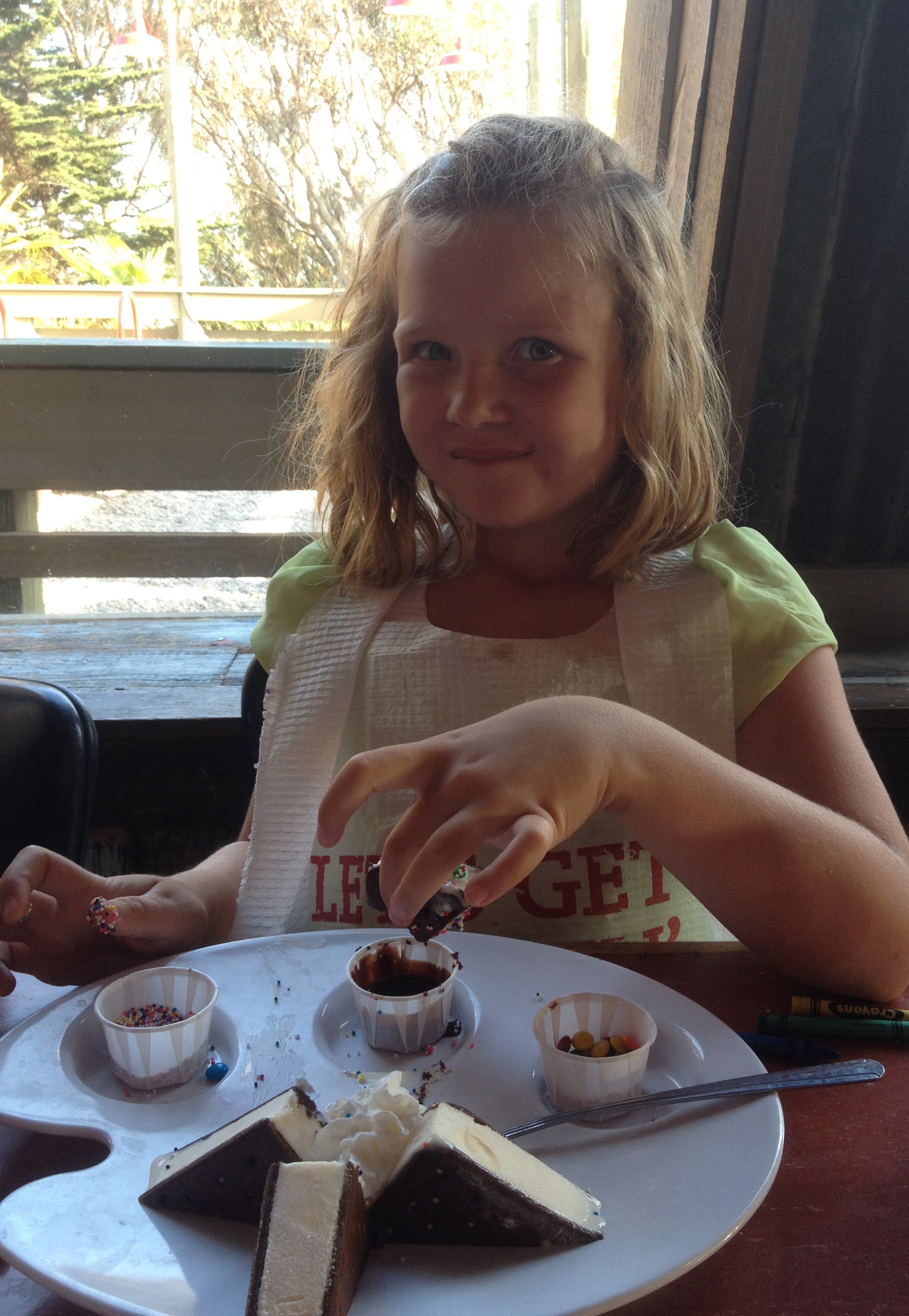 Avery's choice for dinner was, Joe's Crab Shack. Does she love crabs or fish? NO! She loves that there's a playground and an awesome dessert. The last time we went there was last year for her birthday dinner!

I woke up in the middle night and heard Sawyer sobbing. I wasn’t sure if he was awake or having a “night terror” so I waited. He kept crying, so I went to check on him. As I opened his door he asked, “Are they gone mom?” I immediately said, “Yes, they’re gone, you’re safe,” and gave him a big hug. Having no idea who or what was gone, I had to ask. He explained that crabs were in his room and one of them bit his toe!! He was fine after that, I tucked him in.

I asked him about the next morning and he remembered it all. I assured him that the crabs were gone!! 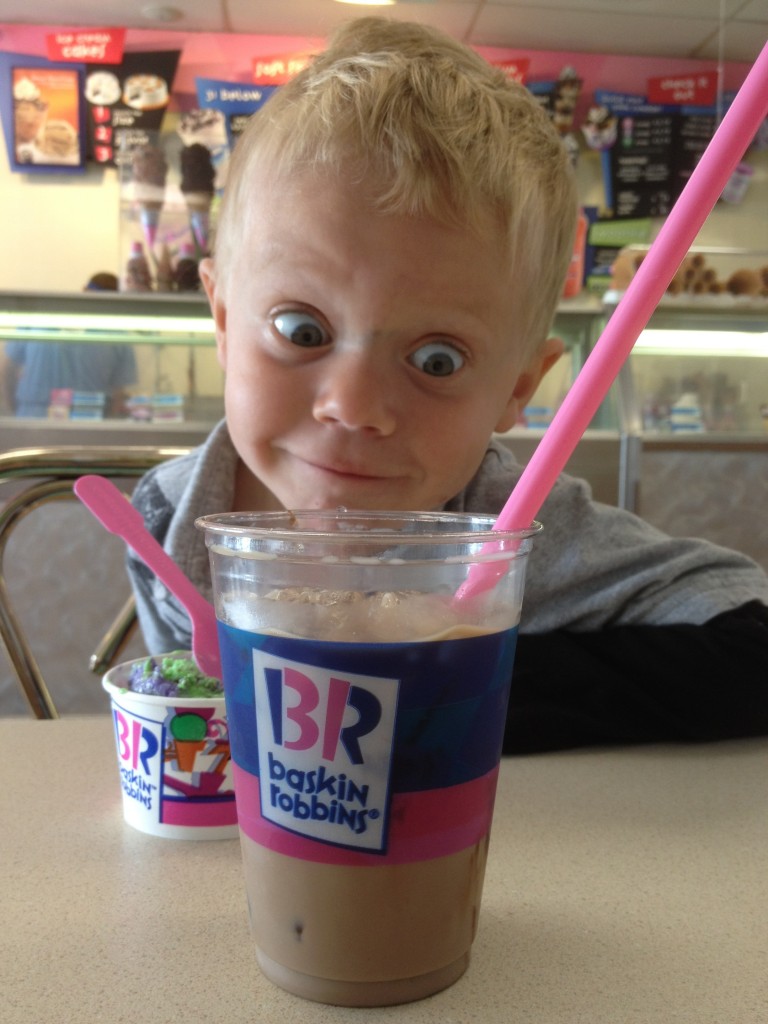 What to do this week? Since we aren’t home, we don’t have all our “stuff” so our resources are limited. Avery’s been asking to do a “real” science experiment ever since we went to a friends school Science Fair a month ago. No time like the present. Pinterest, my new best friend, to the rescue. I showed Avery my board called “Science is fun,” she found a pin called “10 egg activities and experiments.” From there she picked the experiment called “bouncy egg.” 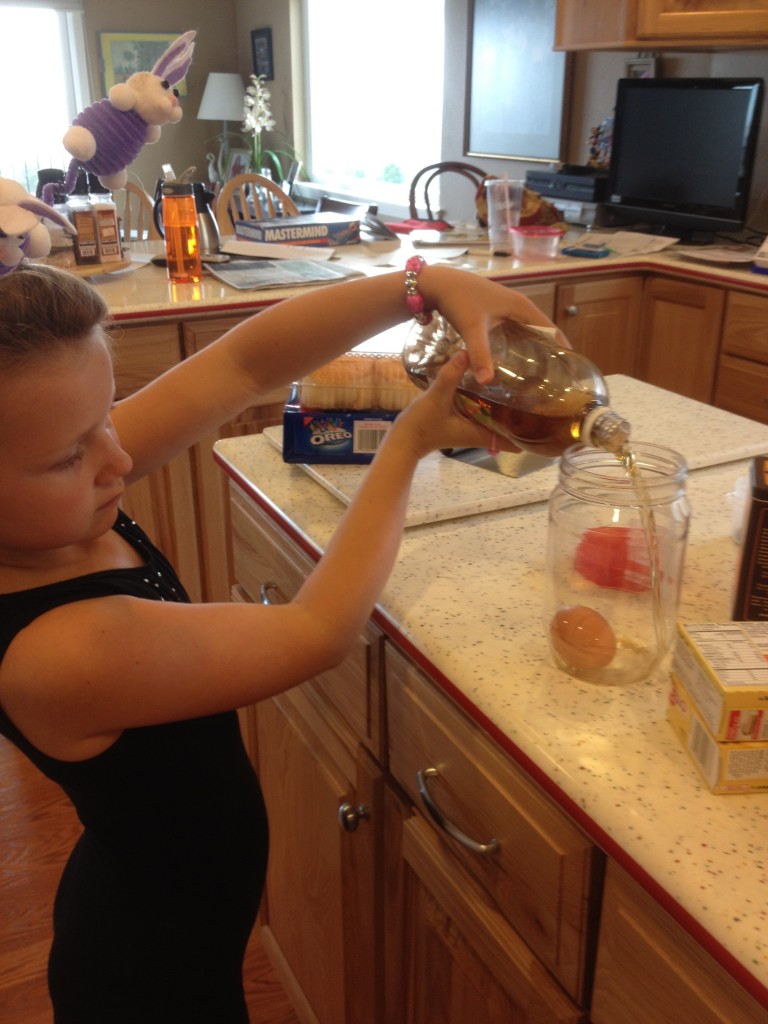 Pouring the vinegar in the jar. Avery proclaimed, "it stinks." Yes, it does! 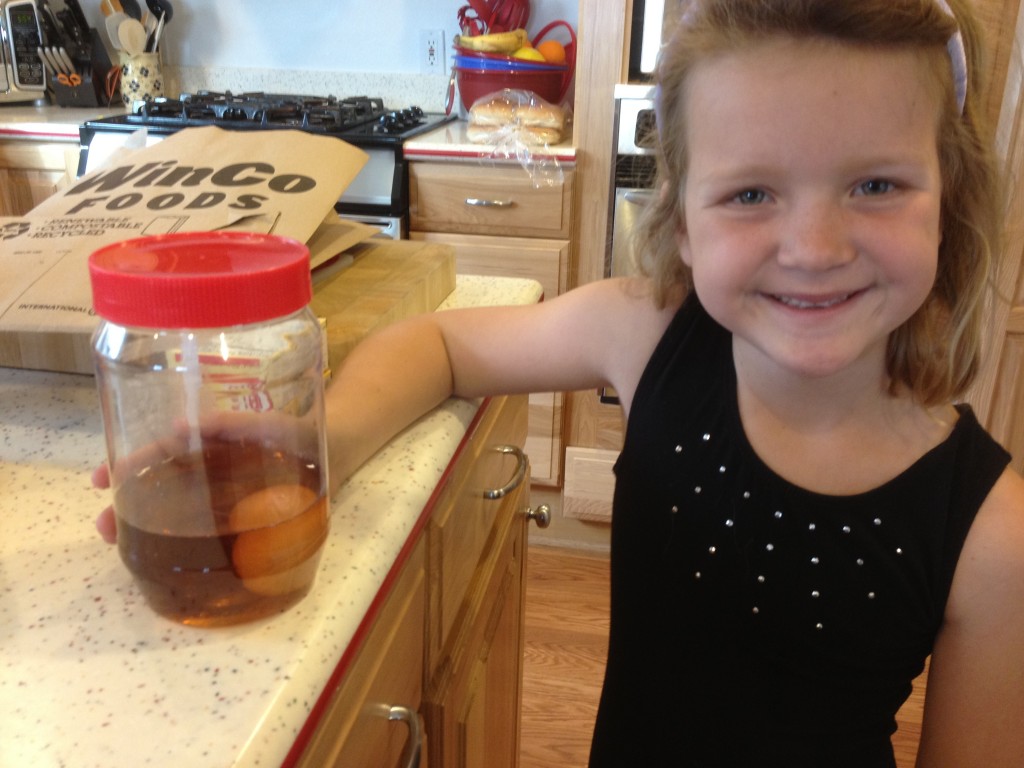 The egg is covered in "stinky" vinegar. Now, we just wait and see what happens. 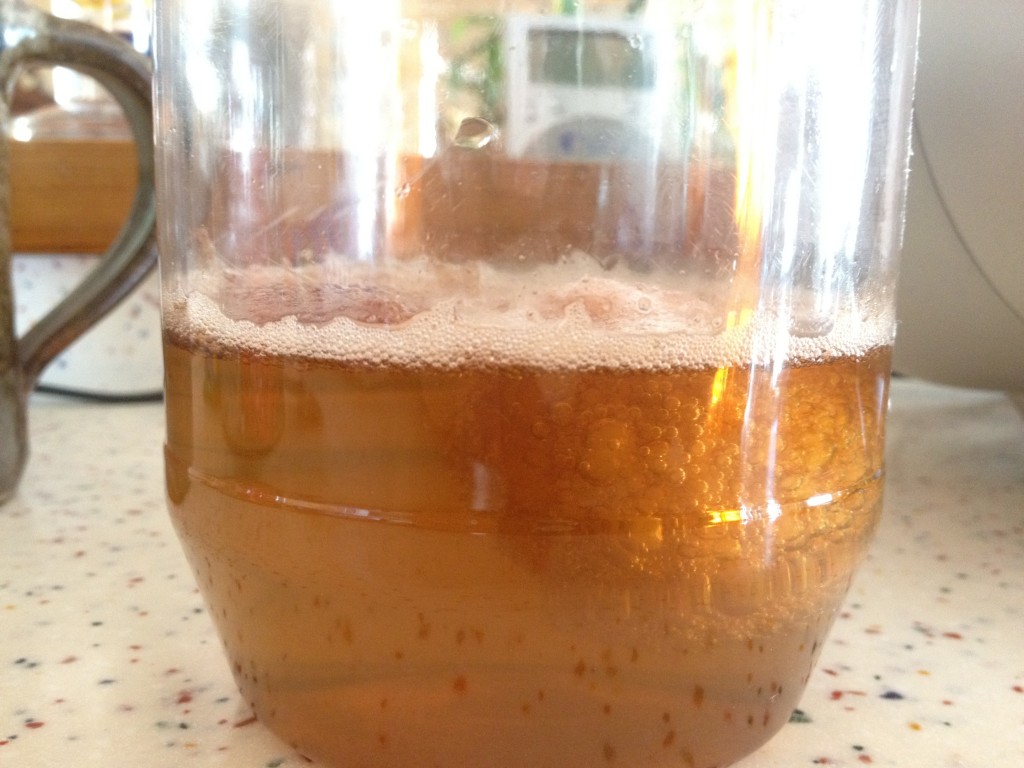 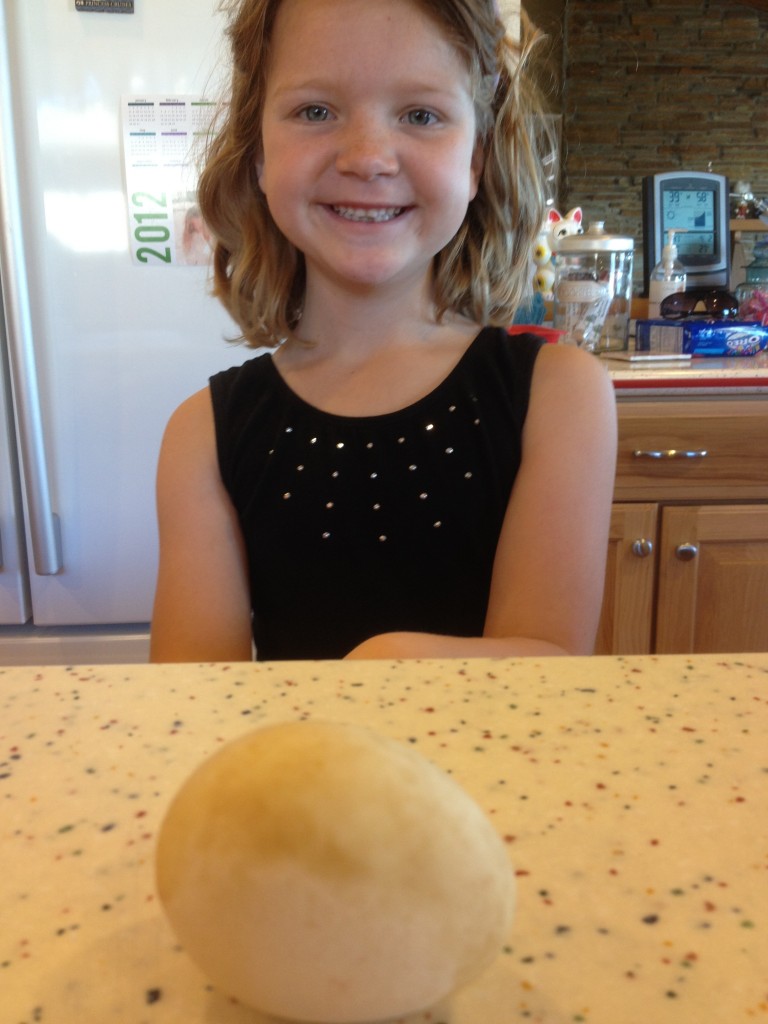 After 21 hours the egg was washed and the stinky vinegar washed off. There was an air bubble in the skin of the egg- icky, but cool! 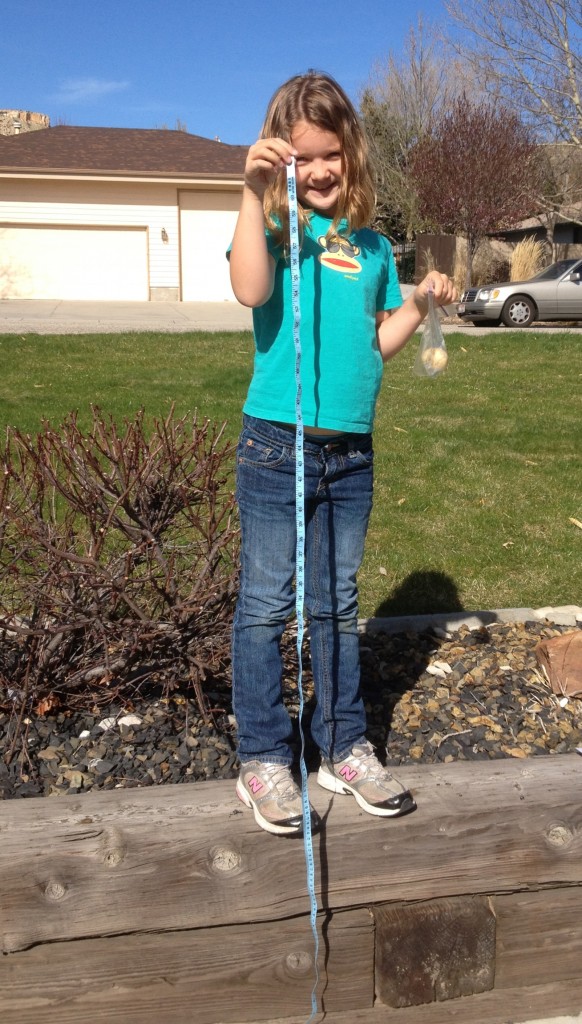 How far can we drop the egg from before it breaks? First she wanted to try 18 inches, it didn't break. With my help the egg was dropped from 100 inches, it still didn't break! 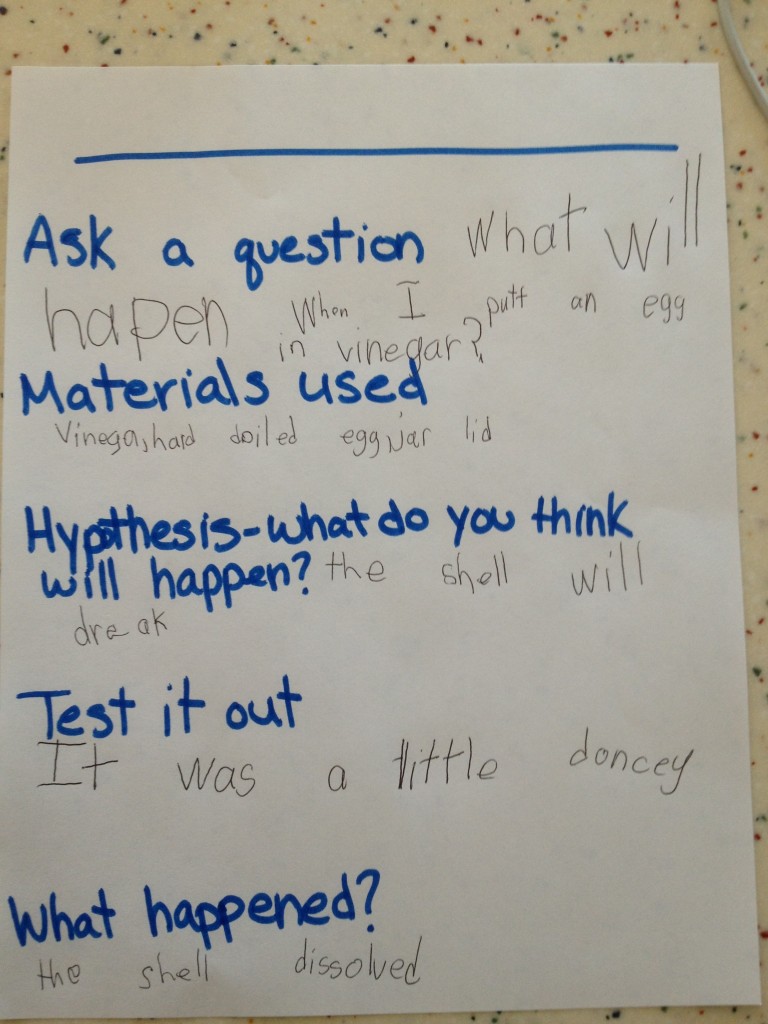 It was a fun experiment. She wants to do another one already. I want to try the same experiment but with a fresh egg, not hard boiled. I think I can talk her into it…

This afternoon my mom mentioned the Peter Rabbit tea set…. yeah, where is that? My sister knew right where it was in the garage. She got it out, she and Avery unwrapped each piece. I hadn’t seen this tea set is 20+ years. I actually remember pouring hot chocolate from the teapot into the tiny teacups. I was excited that Avery would have the opportunity to use it too. Wow, the teacups are really tiny!! 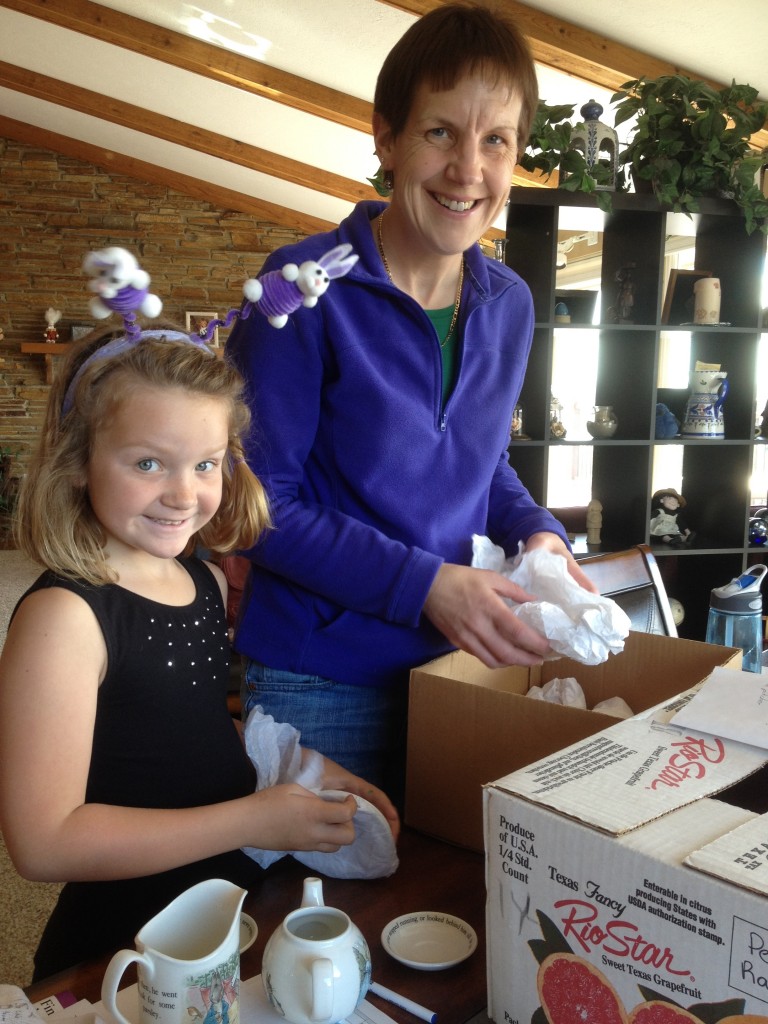 After unwrapping the tea set, Avery & I decided we needed to have a tea party right away. We set to work… First we had to decide on the menu- toast & mini fried cheese, hot chocolate and Oreos. A well balanced tea party, sort of! 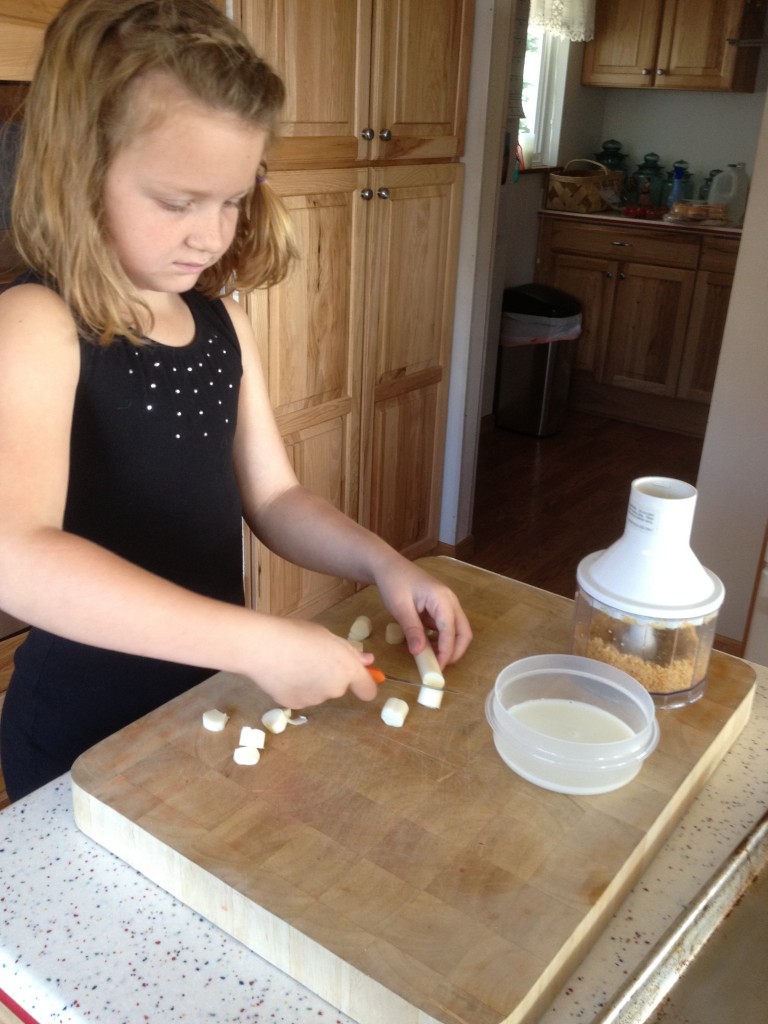 Avery made the mini fried cheese almost all by herself. This was our first time making them, so we didn't know if they'd turn out, they did!! They were super yummy- we'll definitely make them again. 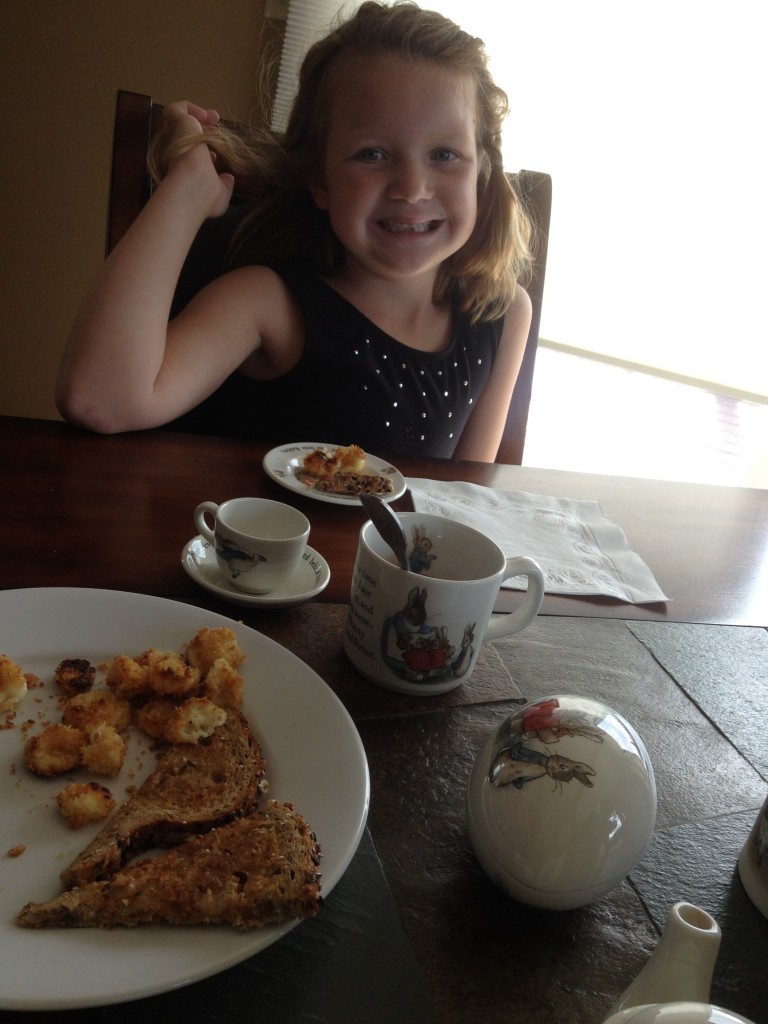 Our spread! It was a fun tea party, just me and my girl. 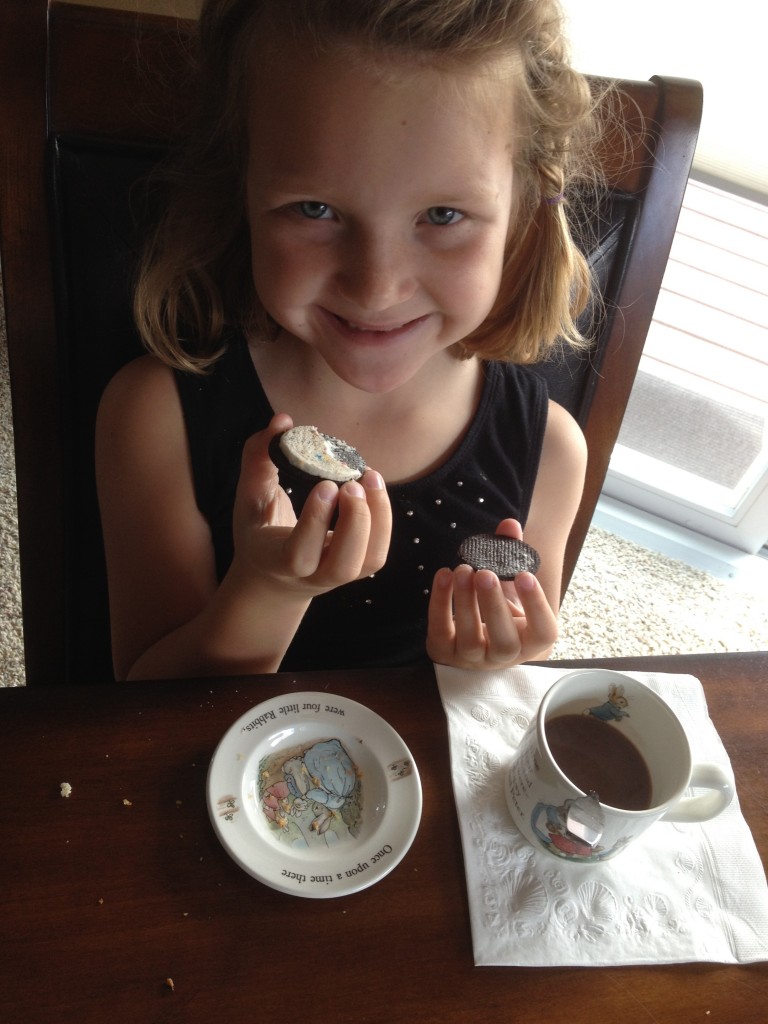 Enjoying an Oreo with her "tea." 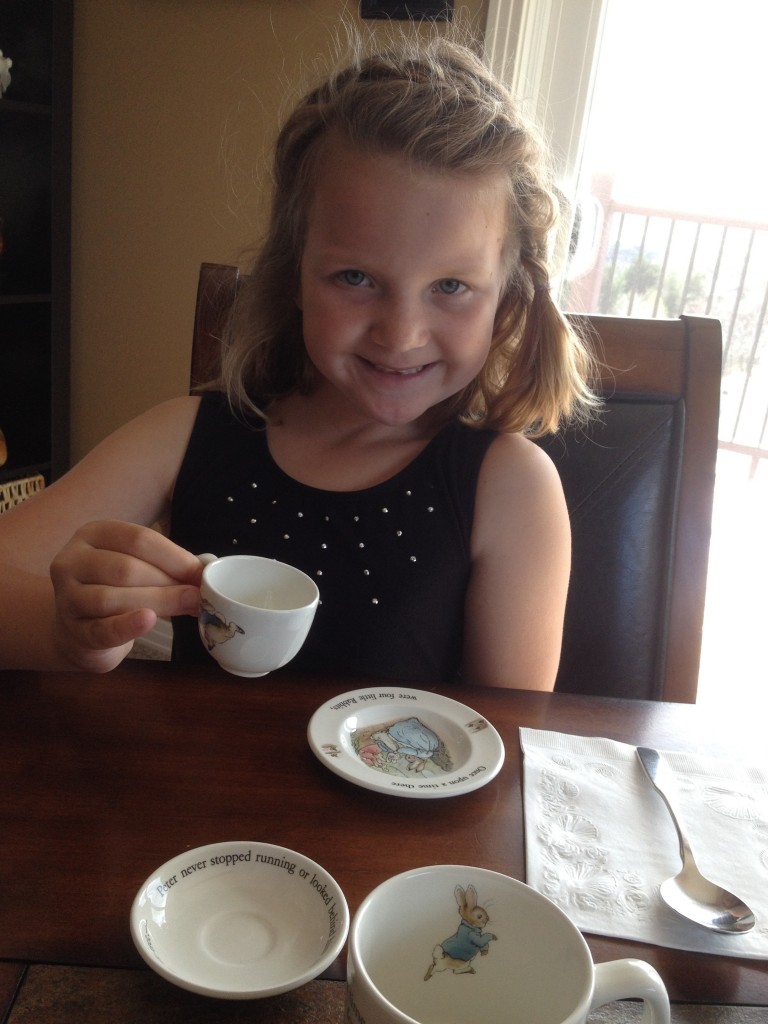 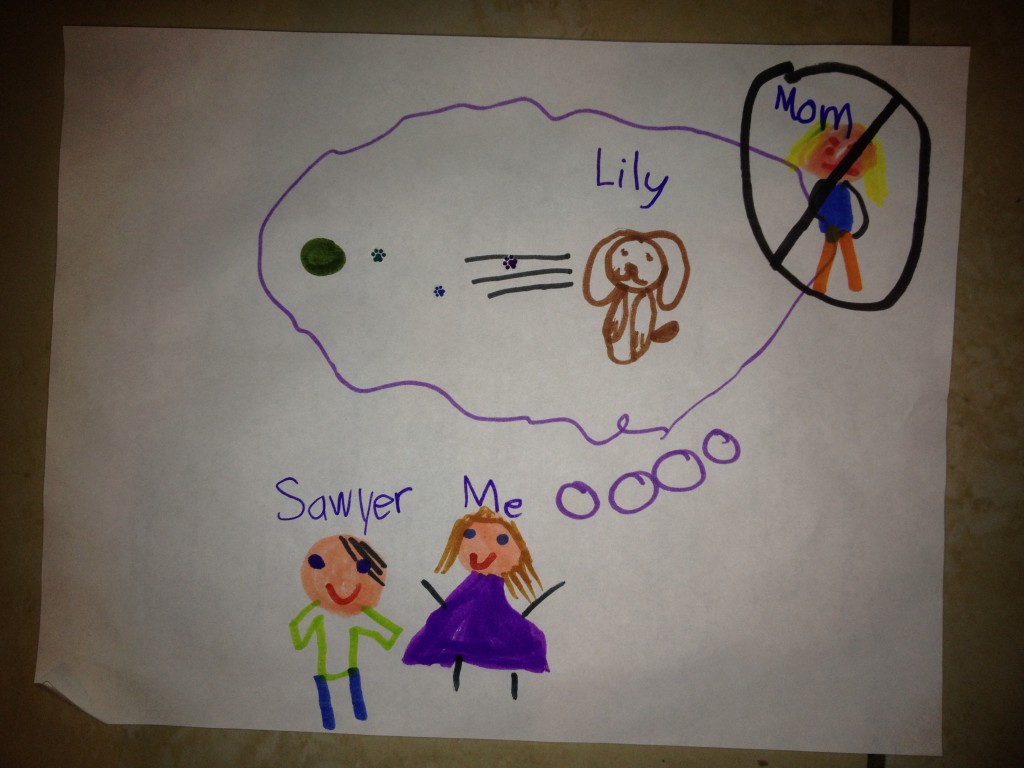 This is a picture Avery drew the other day. She was being very secretive about it, which peaked my curiosity. She showed it to me when she was all done. I needed her to explain to me. She told me, “That’s me and Sawyer, we are daydreaming about a dog. We are sad because you won’t let us get a dog.” I am the mean mom that is crossed out because I won’t let our family get a dog! I laughed a little…

We decided to implement a “commission” based on Dave Ramsey’s take on allowance and earning money.

“There are some jobs they should have to do just because they’re part of the family.” We decided, with Avery, that she needs to feed Minnie every night and empty the 4 trash cans from upstairs by Thursday evening- the trash gets picked up on Friday. She also needs to practice her violin once a day- not a “job” but it’s the same as doing her homework, we expect her to it, and do it well. So far, no complaints.

If she completes all of her jobs, she earns her money, right? No, it’s not that easy. She also has a “+” and “-” section on her board. She’s working to earn, or lose, 25 cents. She can earn more (+) quarters and can lose (-) quarters during the week. She can earn quarters by handling a situation well- not whining, but talking to us calmly about it when she would usually just lose control and whine or cry and by doing extra chores- sweeping, picking up downstairs or whatever chore I think of. She can ask how to earn extra quarters. She can’t ask “did I earn a quarter for…” (sharing my snack with Sawyer). Although, I would give her a quarter for that, she can’t ask for it. She can lose quarters by whining, having an attitude and sass. We simply tell her “stop whining, that’s a quarter.” At first she was a little offended that we kept taking quarters from her, but she quickly caught on… just stop! We see it this way- to be a good employee or employer whining and complaining will not be accepted- besides that, it’s just so annoying!! 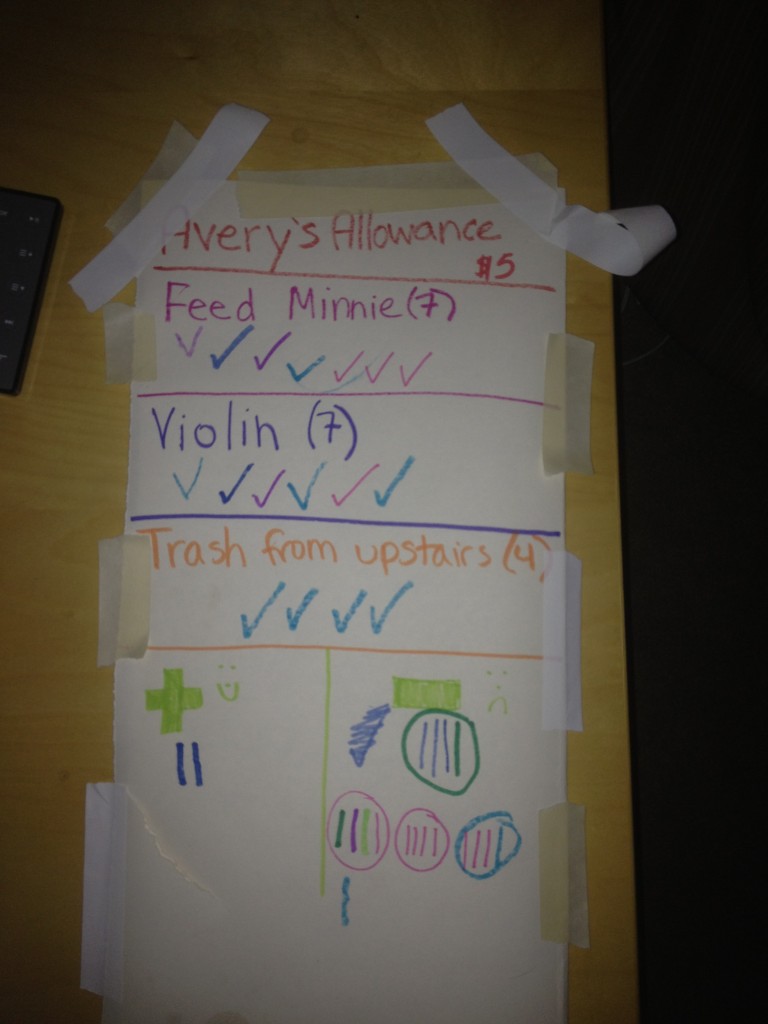 Week 2 of Avery's "allowance." So far this week she hasn't lost any quarters, it's been 2 days!

“Once they’ve earned their money, sit down with them and divide it into three separate envelopes: one for saving, one for spending, and one for giving. This way, they get to learn about these three important things while they’re learning how to work.” Love this idea. Unfortunately for Avery she’s in debt! She can’t find all the cash she had ($80+) to pay her half of the her new bike ($55). I really hope she figures out where her money is!!

We really want Avery to learn that there is an association between work and money. If she does her jobs well, she gets paid well, if she doesn’t then she won’t get paid well or at all. It’s been two weeks; the first week she earned $4 (yeah!), but at the end of week 2 she earned $1.25!! Lots of whining and complaining on going on!! She’s going to work harder this next week to earn a better pay check next Saturday. 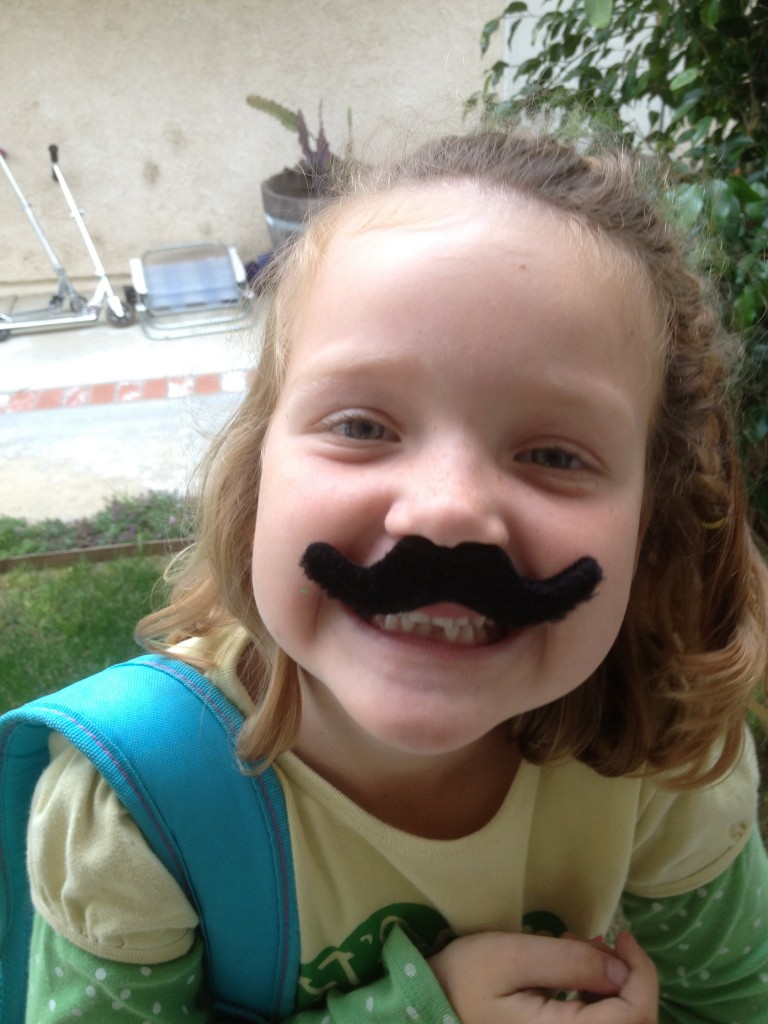 I forgot that Avery has more half days this week. So after she finished her homework we settled down on the couch to watch the Johnny Depp version of “Charlie & the Chocolate Factory” this afternoon. We had to have some chocolate while we watched it so I gave each of them a few M&Ms and some mini chocolate chop cookies. 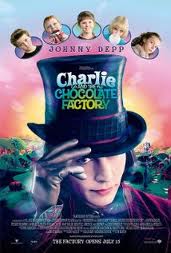 Avery really liked this version of the movie because it was closer the book than the older version. She was happy that Violet grew larger and taller in this movie and that Veruca demanded a squirrel, not a goose. She’s excited to read the next book, “Charlie & the Great Glass Elevator” soon.

Avery finished Charlie & the Chocolate Factory- finally. It took her a lost 3 months! She did read a lot of book in-between. She took the AR (accelerated reader) test at school and passed. She was very excited to earn 5 points- previously the books she’s read are .5 to 1.0 points. She really liked the book. Her favorite characters are the Oompa Loompas because of all the fun songs they sing! When I asked her what she would tell someone about the book who hadn’t read the book, she replied “it’s full of natural consequences.” Well, that’s true! 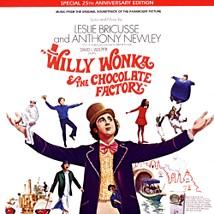 I told her when she finished we would watch both Wonka movies. We watched the old one first. I didn’t expect her to finish the book so early, so I wasn’t prepared with the movies- oopsy. We borrowed a copy of the older version and watched it on Saturday night. She LOVED it. She kept pointing out “that was in the book,” “who is is that, he wasn’t in the book!” “I didn’t think he’d look like that.” At one dramatic part of the movie I asked her “what’s going to happen?” she answered, “I don’t know, it wasn’t in the book!” It was great!!! Yes, we ate some chocolate during the movie!

We won’t be able to watch the newer version of the movie till Spring Break, a week away. I’m looking forward to it, I know she is too!!

Before the softball game on Tuesday, the coach called all the girls together tell them that during the game they need to stay on the bench in the batting order… last week a girl wasn’t able to bat because she was visiting with her mom and missed her turn. Avery raised her hand and announced “That’s called a natural consequence!” I doubled over in laughter.

She finally finished reading Charlie & Chocolate Factory (Roald Dahl). She told me liked the book and it was “full of natural consequences.” She then explained what he each kid made wrong choices.

It’s nice to know she does listen.